If a few years ago, someone said that China’s rise had ended and China was declining, no one would have believed it. But this argument has resurfaced in the last half of the year. American scholars Michael Berkley and Hal Brands published long articles on this topic in Foreign Affairs and Foreign Policy last year.
Worse still, in recent weeks, many Chinese cities including Shanghai have been closed down due to COVID-19, and China-US competition has become fierce after the conflict between Russia and Ukraine. Some people are pessimistic about China’s future. Therefore, I think it is necessary to talk about the rise of China and the competition between China and the US.
I want to elaborate in three parts: First, why is there a strong foundation for China’s continued rise? Second, how to understand current China-US tension? Third, what should China and the US compete for in the future? 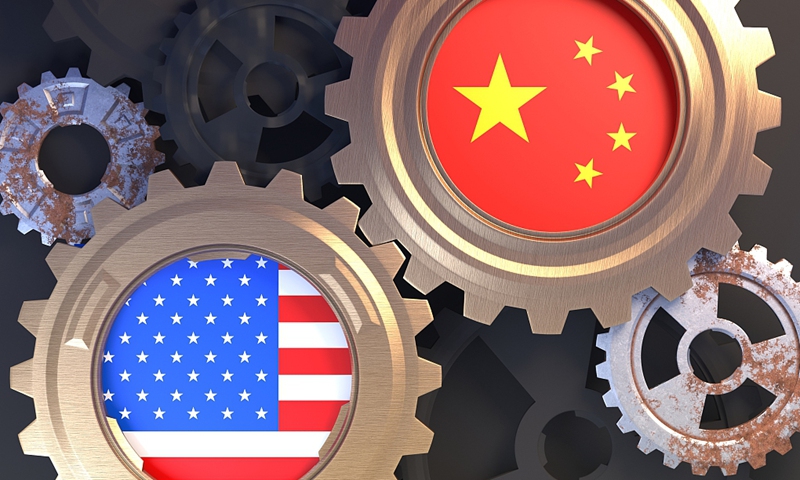 China’s development not to be dominated  by the US
In the third decade of the 21st century, China has more control over the pace of its development than ever before. Unlike Japan, China cannot be lectured and manipulated by the US. China is not Iran, or Russia, pursuing a completely anti-US strategy. China maintains its power against the US, and can defend its core interests without being led by Washington’s heavy handed will.
An important example is that despite the fact that the last US government – Trump, Pompeo, or the Biden government’s Blinken and Pelosi, constantly provoke China in the most vicious language.
Except for the necessary counter-measures and criticisms made by the China’s Ministry of Foreign Affairs, the top decision-making level of China never countered with harsh words. China diplomatically avoided provoking the US more seriously. This has prevented China and the US from falling into a new “Cold War” trap.
Of course, the US should not take any chances. If cases similar to the bombing of the Chinese Embassy in Yugoslavia in 1999 or the collision between Chinese and US military aircraft over the South China Sea in 2001 were to happen again, China could surely have a strong counterattack. That would be a disaster for China-US relations, and a tragedy for humanity.
In this regard, the Washington Post last year reported that the chairman of the Joint Chiefs of Staff Ed Milley had a phone call with the Chinese military and promised not to launch an attack on China. If this is true, such military rationality and calmness should be appreciated.
The US should give up any illusions that China will not fight back. In fact, since Trump’s policy toward China, the world has seen that Beijing has maintained its ability to strike back with anti-sanction moves.
For example, the US imposed 25 percent tariffs on Chinese goods, while China retaliated with 25 percent tariffs on US goods.
The US closed the Chinese Consulate General in Houston, and China reciprocated by shutting down the US Consulate General in Chengdu.
Washington sanctioned Chinese officials, and Beijing retaliated against US officials.
China is an opponent of the same magnitude as the US. I agree with Dr. Kissinger’s latest statement that no country has the potential to dominate the world. There should be no illusions that the US can dominate China.
China’s global strategic goal is still to maintain the stability of the international order. According to Professor Alastair Iain Johnston of Harvard University, China is a country that likes to maintain the status quo. It has joined most international treaties and organizations since World War II. China has acceded to some international treaties, but the US has not, such as the International Convention on the Law of the Sea. For some, such as the Arms Trade Treaty, China recently joined, and the US withdrew. Also, China is the biggest supporter of the Paris Agreement in climate change.
Overall, China and the US maintain a highly consistent strategy on climate change, anti-money laundering and anti-cybercrime. During the financial crisis in 2008, then US secretary of state Hillary Clinton came to China, hoping to “help each other.” Secretary Clinton asked China to increase its holdings of US Treasury bonds, and China did.
Since 2013, China has promoted the Belt and Road Initiative, even inviting the US to join it many times. Now, it is also advocating cooperation with the “B3W” program of the US. Total US assets in China have exceeded $2.2 trillion. The average annual profit margin of American companies’ investment in China remains above 15 percent. In fact, the Federal Retirement Reserve Board, which controls more than $600 billion, has repeatedly vowed to increase investment in China’s capital markets. From this point of view, it is not in line with the facts if we exaggerate the strategic differences between China and the US.
There is also an often-overlooked fact; In no legal documents or official reports does the Chinese government claim to surpass other countries as its strategic goal. In 2014, both the IMF and the World Bank released a study stating that China’s economic size had surpassed that of the US in PPP terms. However, the Chinese government did not accept this statement.
On the contrary, China has stressed that it will always be a developing country. It will not accept G2 membership, or join the rich countries club. No other country in the history of the world has ever been as self-disciplined as China has with its rise. China declares that it will never seek hegemony, that it will not be the first to use nuclear weapons, and that it will never invade other countries.
It has consciously written these declarations into its Constitution. Indeed, over the course of the past 500 years of globalization, is there any country whose rise has been more civilized than China’s?

The competition between China and the US
Human civilization is approaching the close of the first quarter of the 21st century with eyes toward 2050. What kind of competition do China and the US need to truly fathom if they are to advance global civilization in their great power competition?
In my opinion, China and the US should first compete to solve the dilemma of global development. The US was once making significant contributions to the world after World War II. But the US, in the 21st century, has failed to promote national health, the creation of new enterprises, and the continuous improvement of employment opportunities in the world.
By contrast, the successful hosting of the 2008 Beijing Olympic Games and 2022 Beijing Winter Olympic Games accelerated the rise of China’s national reputation. Also, high-speed rail construction, e-commerce, e-payments, poverty eradication, anti-corruption and pollution prevention have greatly boosted the attractiveness of China’s development model to developing countries.
In the eyes of many countries, the democratic transformation of the past half-century has only completely changed the fate of a small number of countries. Yet the majority of countries are still poor. However, China’s counter-attack road from poverty to wealth makes it appear competitive enough to the US model.
The essence of the competition between China and the US to solve the global development dilemma lies in this question: Which country can offer more effective solutions to world development? More importantly, which country can best manage the convenience of life, the well-being of its people, social stability and economic recovery?
Second, China and the US should compete to deal with global climate change. Climate change has reached a critical moment. More and more climate scientists believe that if the Earth’s temperature continues to rise without taking substantive and effective measures, the 21st century could be the last complete century of human civilization. The climate crisis will also be accompanied by other sharp crises: energy, financial and social. These will be of much greater magnitude than the suffering caused from the COVID-19 pandemic.
By the end of 2020, more than 130 countries had pledged to be carbon neutral over the next 20-40 years. This included the US by 2050 and China by 2060.Yet the world has obviously underestimated the smoothness of the cooperation between the two countries in addressing climate change.
China and the US account for about 45 percent of global carbon emissions, and can provide more than 60 percent of the world’s financial resources. If the two countries continue to maintain tensions over geopolitics, economics and trade, regional security, and other fields, their joint efforts to deal with climate change will be severely damaged. This will test Joe Biden’s China policy.
Moreover, China and the US should compete to promote global technological innovation. Developing intelligent technology is like opening a “Pandora’s box.” Will human beings become stronger or weaker in the face of AI technology? Toward new prosperity, or extinction? These will be the ultimate tests of humanity’s thinking.
This is a competition related to “Endless Frontier” named by Dr. Vannevar Bush in 1946. The race for the “endless frontier” is already underway in China and the US.
However, for Chinese social science scholars like me, the scope of the “competition for endless frontiers” between China and the US is probably broader and more complex than before.
The US is not necessarily losing this competition. Nor is China destined to win it. More precisely, as long as one country loses, the other cannot win. Just as with COVID-19, as long as the virus is not under control, it is impossible to say who is winning the war against the pandemic.
If the two countries have to compete, I hope it’s not a boxing match. I hope it’s more like playing golf. Whoever wins, will need to support global civilization, and development of the world. From this point of view, the real test of the two countries’ competitive civilization has just begun.

The author is a professor and executive dean of Chongyang Institute for Financial Studies at Renmin University of China. The article was a speech of him delivered at the Brown University China Summit on Sunday. [email protected]