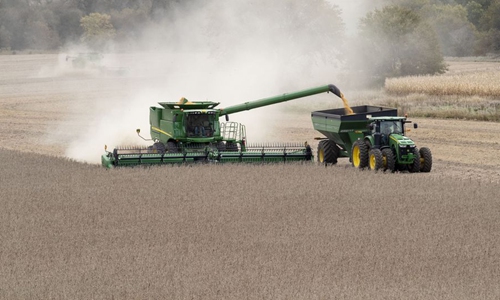 A combine harvester and a grain truck work in a soybean field on the Pellett family farm in Atlantic, a small town in Iowa, United States. (Xinhua/Wang Ying)

Trade between China and the US remained robust for the first 11 months of the year, reaching $682.32 billion, a 30.2 percent year-over-year increase, Chinese customs data showed Tuesday, even as bilateral ties remain in a downward spiral the constant US aggression against China.

Bilateral trade could hit an all-time high by the end of the year as the US continues to buy more Chinese manufactured products at record inflation levels and as China expands imports of US agricultural, energy and other products, Chinese experts noted.

The US must increase imports from China to fill domestic deficits, Beijing-based economist Tian Yun told the Global Times on Tuesday. “If not, US inflation will likely continue to rise.”

Meanwhile, China has also increased imports of some commodities such as energy products and aircraft from the US, Gao Lingyun, an expert at the Chinese Academy of Social Sciences in Beijing, told the Global Times on Tuesday.

Jiao Shanwei, editor-in-chief of the news website cngrain.com, said soybean imports increased during the soybean export season from North America as hurricanes in the US and rising ocean freight and freight container rates slowed shipments. earlier.

Jiao added that food importers in China have also ramped up purchases of soybeans and other necessities for the upcoming New Year and the Spring Festival holidays.

Going forward, Tian expected a new record high for China-US trade in 2021, likely to remain on a strong path next year.

Gao pointed out that robust trading has the potential to reach higher levels as the end of the year will usually be a high as the holiday season normally boosts trading.

However, Gao noted that the lecture did not fully live up to expectations due to tightened epidemic prevention policies amid the Omicron variant and disrupted logistics in the US.

“While the US has recognized that China-US cooperation is mutually beneficial, some opposing voices in the US could become a hidden concern for bilateral economic and trade cooperation in the future,” Gao said.

As the first trade deal is due to expire at the end of 2021, analysts noted that the two countries need an opportunity to discuss bilateral trade.

“If the US removes punitive tariffs on Chinese products, there would be a win-win outcome for both as it will help ease US inflationary pressures while increasing Chinese exports to the US,” Tian said. adding that the current “hot economy, cold politics” landscape will persist between the two largest economies in the world.

US Treasury Secretary Janet Yellen told CBS in an interview earlier in November that removing the trade tariffs the Trump administration imposed on Chinese goods would “make a difference” in raising US inflation.