Kemp, who is running for reelection, has used the powers of incumbency in an attempt to thwart a Republican primary challenge by former U.S. Sen. David Perdue. He’s turned bill-signings into public events, especially for legislation popular with conservatives, such as a rollback of gun restrictions and an effort to direct how race is taught in classrooms. He even went to Perdue’s hometown diner to sign a huge tax cut.

Kemp has also helped spread around a lot of money, with a record $30.2 billion budget that delivers raises to teachers and state employees. That, too, had a strong connection to the massive amount of federal COVID-19 relief funding that went directly to Georgia households, as well as state and local governments. That money helped fuel soaring tax collections that resulted in a $3.7 billion state surplus for the past fiscal year.

The federal funds Kemp gave out this past week follow similar grants he issued in February to fund water and sewer and broadband projects.

All those grants were given based on recommendations by committees of lawmakers and state officials that Kemp appointed last year to review applications. In all, the state received about 1,500 applications for spending the COVID-19 money.

The largest chunk of the money handed out this past week was $150 million that will go to the Georgia Hotel & Lodging Association to be distributed to hotel owners who were hit hard by the pandemic.

“This grant is so important to Georgians — every single hotel property in the state has suffered significant loss since March 2020,” said Brad Koeneman, general manager of Hilton Atlanta and chairman of the association.

A pair of sizable grants were also given to nonprofits.

The Georgia Investments in Housing Grant will provide $100 million to support nonprofits that provide affordable housing and aid the homeless.

The Victims Service Provider Grant will use $50 million to help nonprofits that have faced economic hardship during the pandemic.

Other smaller grants were awarded to locally based groups, including roughly $29.6 million to the Atlanta Community Food Bank to address food insecurity issues and $12.7 million to Buckhead Christian Ministries to pay for expansion of its emergency assistance program.

Dana Deweese. right, with the secretary of state’s office, gives an update to the State Election Board on an investigation into allegations of “ballot harvesting” during the 2020 presidential election in Georgia. The investigations have not validated claims made in a move called “2000 Mules” that claims the election was stolen from Donald Trump. Miguel Martinez/ [email protected] 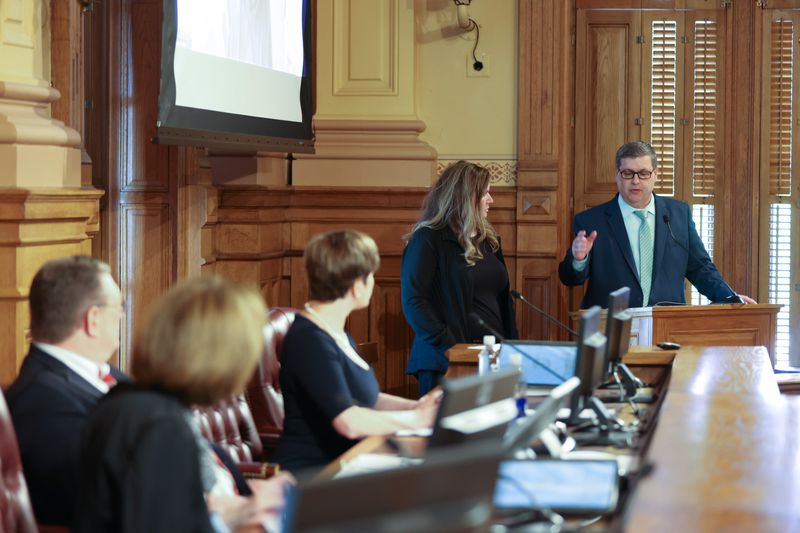 Dana Deweese. right, with the secretary of state’s office, gives an update to the State Election Board on an investigation into allegations of “ballot harvesting” during the 2020 presidential election in Georgia. The investigations have not validated claims made in a move called “2000 Mules” that claims the election was stolen from Donald Trump. Miguel Martinez/ [email protected]

Allegations of “ballot harvesting” during the 2020 presidential election in Georgia have, so far, failed to stand up to the test of investigation.

The claims were raised in the film “2000 Mules,” which incudes surveillance video showing a man inserting five absentee ballots into a Gwinnett County drop box.

That would appear to be ballot harvesting — the collection and delivery of multiple absentee ballots. But a state investigator confirmed, after tracking license plates and interviewing voters, that the ballots belonged to members of the man’s family who live in the same household. That is permitted under Georgia law, as is the delivery of ballots by caregivers for disabled voters.

The State Election Board voted unanimously this past week to dismiss that case and two others after the investigator reported that he tracked license plate numbers and interviewed voters who verified the family connection.

“Just because something looks compelling doesn’t mean it’s accurate,” said Matt Mashburn, the Republican chairman of the State Election Board. “We wanted to reassure the public that yes, we have seen the videos, we are taking them very seriously, we’re tracking every one of them down, and we’ll report back to you what we find.”

So far, what the board has found does nothing to validate the allegations in “2000 Mules,” which theorizes that 2,000 people in Georgia and four other swing states collected and delivered multiple absentee ballots to drop boxes in order to steal the election from Republican Donald Trump.

Conservative provocateur Dinesh D’Souza made the film, which promotes allegations by a Texas-based organization called True the Vote, that are based on drop box surveillance video and cellphone location data it gathered.

The GBI reviewed True the Vote’s allegations in the fall and found they lacked sufficient evidence to merit a law enforcement investigation.

“What has not been provided is any other kind of evidence that ties these cellphones to ballot harvesting,” GBI Director Vic Reynolds wrote in a Sept. 30 letter. “As it exists, the data, while curious, does not rise to the level of probable cause that a crime has been committed.”

The State Election Board issued subpoenas last month to True the Vote seeking documents, recordings and names of individuals involved in the alleged ballot harvesting. True the Vote has yet to comply.

Even if ballot harvesting occurred, it wouldn’t invalidate legitimate ballots that were returned by unauthorized individuals. Verified ballots of registered voters still count, regardless of how they were delivered.

Gary Black, left, says he will not support Herschel Walker in November if Walker beats him to win Tuesday’s GOP primary for the U.S. Senate. Citing allegations that Walker has threatened several women, Black said, “He has not earned my vote.” 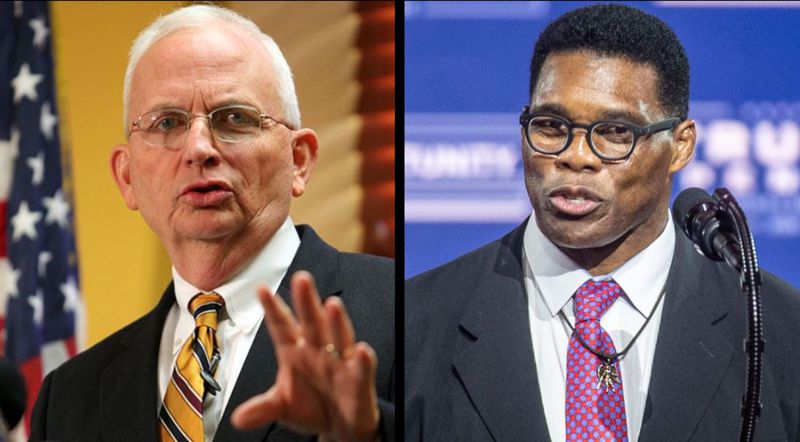 Gary Black, left, says he will not support Herschel Walker in November if Walker beats him to win Tuesday’s GOP primary for the U.S. Senate. Citing allegations that Walker has threatened several women, Black said, “He has not earned my vote.”

Walker continues to take hits from opponents in Senate race

Republican U.S. Senate candidate Herschel Walker is so confident he’s going to win Tuesday’s primary — thanks to strong numbers in both polling and fundraising — that he’s ready to party.

He’s invited the five other contenders in the GOP contest to be his guests for a “unity celebration.”

But they’re not prepared yet to play nice.

Former Navy SEAL Latham Saddler and Air Force veteran Kelvin King have upped their criticism of Walker over his refusal to participate in debates and forums.

Saddler has slammed Walker in a new television ad for dodging public appearances with other Republican candidates.

“If Herschel Walker won’t debate me, he will lose to (Democratic U.S. Sen.) Raphael Warnock,” Saddler says in the ad.

But Gary Black, the state’s outgoing agriculture commissioner, has delivered the hardest hits on the former football star, many of them focusing on Walker’s history of violence.

Black is no longer just opposing Walker in the primary. If Walker gets the nomination, Black says he won’t support him in November.

“He hasn’t earned my vote,” Black said, citing a history of allegations that Walker threatened women.

The Atlanta Journal-Constitution reported that an ex-girlfriend of Walker’s told police in 2012 that when she tried to end what she said was a long romantic relationship, he threatened to “blow her head off” and then kill himself.

CNN uncovered a police report from a Texas woman who had been a Dallas Cowboys cheerleader who told authorities in 2002 that Walker had threatened and stalked her.

Walker’s ex-wife, Cindy Grossman, obtained a protective order in 2005 after alleging that he had threatened to shoot her in the head.

Walker’s campaign has cited his candor about his past, including a 2008 memoir that highlighted his struggle with mental illness.

While Walker has largely chosen to ignore his GOP rivals, saying he doesn’t want to give them any free publicity, his campaign issued a rare, and tough, response to Black’s comments.

“Gary’s ego continues to get in the way of good judgment, but we’re focused on beating Warnock,” a Walker official said. “It’s a sad ending to a solid career.” 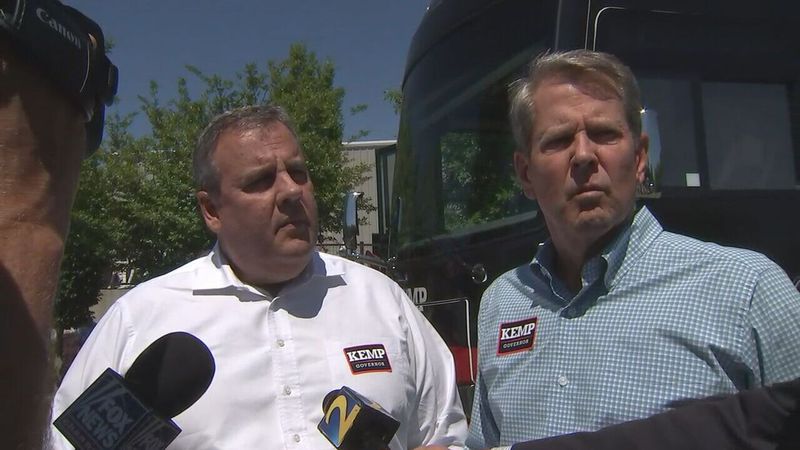 When word came out that Kemp would be campaigning with former New Jersey Gov. Chris Christie and former Vice President Mike Pence, once the governor of Indiana, the Democrats did their best to remind Georgians that both those men led states that have expanded Medicaid to more people.

For Christie’s appearance, Abrams shot out a tweet hitting Kemp for blocking a plan to provide coverage under the federal-state public health plan for the poor and disabled to Georgians with HIV.

“Today,” she wrote, “Chris Christie (who expanded Medicaid in New Jersey) is appearing with Brian Kemp, who deprives 500,000+ Georgians of Medicaid access and just vetoed access for Georgians living with HIV. Kemp doesn’t care, so Georgians suffer while our tax dollars flow to 38 other states.”

Abrams has made Medicaid expansion a top priority on her platform.

It was also a key point of contention in the 2018 race between Abrams and Kemp.

Abrams sought an expansion of Medicaid that would, according to estimates, cover at least 400,000 additional Georgians in need of health insurance.

Like other Republicans, Kemp has said that full expansion would be too expensive for Georgia, although the federal government would pick up 90% of the costs for newly eligible adults.

As governor, Kemp has backed a narrower alternative, a program that would allow Georgia to impose a work and activity requirement for some lower-income Georgians to qualify for health coverage under Medicaid. Kemp’s administration has estimated that it would cover about 50,000 of Georgia’s poor adults.

The state received a waiver from the Trump administration to allow the work requirement, but the Biden administration put that on hold. The state is now fighting for restoration of the waiver in court.

More can be found online

Here’s a sample of other stories about Georgia government and politics that can be found at www.ajc.com/politics/: