Quick and inexpensive test for dysosmia in COVID-19

Anosmia is a recognized symptom of coronavirus disease 2019 (COVID-19), although it is not present in many patients. A new study published on the preprint server medRxiv * discusses the potential benefits of using paired ampoules of n-butanol to screen for COVID-19 and detect those at greater risk for serious illness.

The loss of function in the nasal olfactory epithelium has been well documented to indicate the potential presence of the severe acute respiratory syndrome coronavirus 2 (SARS-CoV-2). It is noteworthy that older people generally show a decrease in olfactory sharpness, while also having a higher risk of severe COVID-19.

The presence of anosmia in COVID-19 generally correlates with less severe disease, conversely with affected patients who are typically younger in age. The exception is when the loss of odor is prolonged. The mechanism behind anosmia is thought to be the rapid swelling of the olfactory mucosa that causes the olfactory cleft to block, thereby preventing odor molecules from penetrating it to stimulate the olfactory neurons.

Sudden, unexplained onset of anosmia is likely an indicator of the intensity of the initial inflammatory immune response to viral infection. “

While patients are asked about anosmia, the detection rate is better correlated with objective tests. These tests are independent of cultural sensitivity to certain odors, are not dependent on confidentiality, and require the patient to be able to speak the language used to describe the odorant.

Scratch-and-sniff tests are used to identify a particular odorant among many; however, graded olfactory stimuli are more useful in providing a direct assessment of olfactory sensitivity. Although several reliable and sensitive tests have been developed, these often require longer time to complete and their reuse may not be practical in a pandemic situation.

The current study discusses the results of using a disposable test to detect odorants that are both inexpensive and designed for instant results. For this purpose, the current test used n-butanol in two concentrations of 0.06% and 3.2%, of which the latter was increased to 0.32% later in the study.

The first test was designed to screen individuals who were naturally hyposmic in the population. The data here were compared with data from the UR Primary Care Central Respiratory Clinic, which was established to screen patients with COVID-19-like symptoms in the early days of the pandemic. The mean viral positivity at this time point was approx. 9%; at this clinic, however, it was three times larger by 31%.

As the early increase subsided, the test was continued for preoperative screening of all patients at a single center.

Viral infection was associated with anosmia, where the odds were three times higher in the presence of SARS-CoV-2. Patients with a positive SARS-CoV-2 test result were twice as likely to experience anosmia compared to those who were negative.

Although increasing age is associated with decreased sense of smell, the opposite trend was seen with COVID-19 positivity. More specifically, with a median age of 55 years, elderly patients tended to have a lower risk of altered odor. In addition, a higher risk of serious illness and death after hospitalization was observed in patients without anosmia.

Compared to the frequency of dysosmia as recorded by the National Health and Nutrition Examination Survey (NHANES) study, the researchers found here that patients over the age of 40 were associated with a 65% higher incidence of anosmia compared to the expected frequency at which COVID-19 -positivity is associated with an increased incidence of anosmia by four times. Thus, the risk of anosmia in patients with SARS-CoV-2 infection was 2.4-fold higher, confirming the aforementioned findings.

The probability of a positive odor detection test was higher when the initial concentration was very low at 0.06% compared to the concentration of 0.32%, which is probably due to the repeated attempts to smell the odorant at the previous concentration. Despite this factor, a lack of detection of the higher concentration indicates anosmia or severe hyposmia.

Using these two concentrations, the researchers also reported that the patient’s age affects the odor sensitivity to the lower concentration of 0.32%. For example, anosmia and hyposmia occur in 1.9% compared to 20.6% of those aged 40-49 years, as determined by the lack of odor of 3.2% and 0.32% n-butanol, respectively. In comparison, NHANES anosmia and hyposmist statistics are 3.7% and 0.3%, respectively.

In COVID-19 odor dysfunction, the patient first becomes unable to smell lower concentrations, and then anosmia occurs, with improvement in the opposite direction. 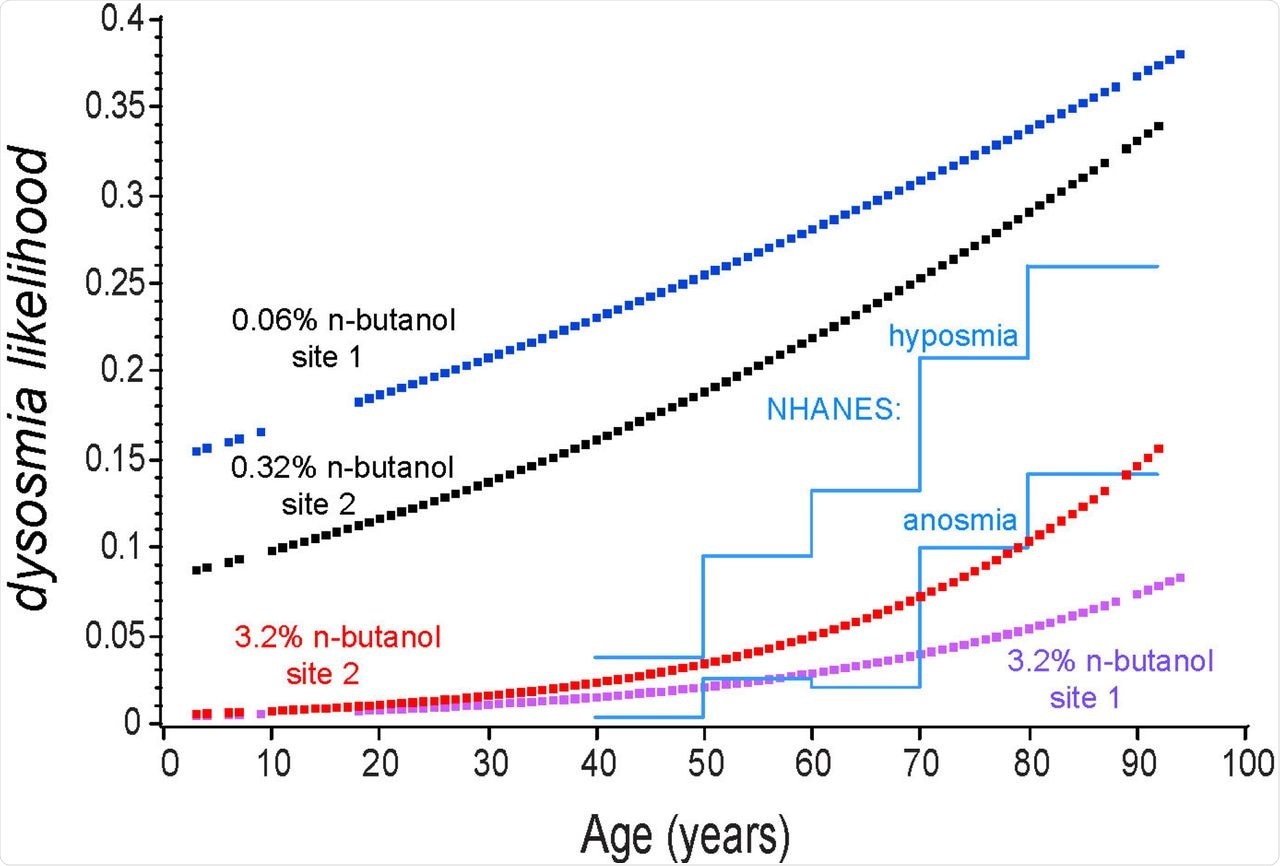 Note that the two low concentrations were more sensitive to odor degradation than the NHANEs criteria, but the NHANEs data were reasonably consistent with the high odor concentration test. The probability of detecting the high concentration of odorant was greater at the site where the first test stimulus was more difficult to detect, suggesting that repeated attempts to smell a very low concentration stimulus resulted in a greater probability of detecting the second and very higher concentration of odorant. Blue: 0.06% n-butanol in water at preoperative site 1; Black: 0.32% n-butanol in position 2; Red: 3.2% n-butanol at position 2; Purple: 3.2% in place 1; Blue lines: NHANES (1) estimate

We suggest that any patient, regardless of age, who develops a sudden onset of dysosemia that cannot be explained in any other way should be tested immediately for COVID-19 infection.. “

The study results show that changes in odor could be detected reliably using this combination of two odorants, with expected changes with age.

Thus, the current approach can be used as a rapid screening method to identify patients who are likely to be infected, while allowing for immediate and repeated testing in a highly cost-effective way. This will also allow for early detection of increases in the incidence of COVID-19, indicating an incipient outbreak and patient response to non-pharmaceutical interventions.

With mass production and rollout, as well as proper reporting systems, such tests can add enormously to available epidemiological knowledge about the pandemic.

Use in screening and health settings can identify those COVID-19 patients at greater risk for serious illness and immediate consideration of immediate medical intervention. If widely used in rapid screening (antigen) tests, viral positivity related to normal olfactory ability would enable faster recognition and medical intervention for those patients at risk of serious illness and a poorer prognosis;. “

medRxiv publishes preliminary scientific reports that are not peer-reviewed and therefore should not be considered as crucial, guide clinical practice / health-related behavior or be treated as established information.