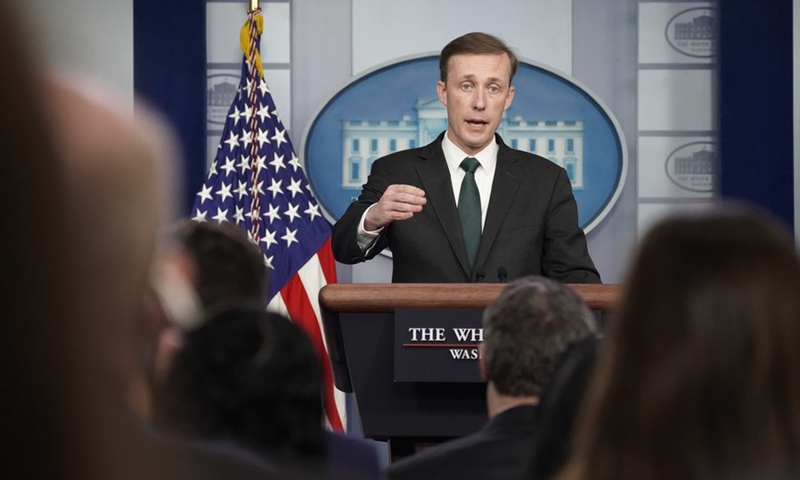 The latest comments from US National Security Adviser Jake Sullivan, who claimed that the Biden administration is not seeking a fundamental transformation of the Chinese system, appeared to indicate softer rhetoric from the Biden administration on bilateral relations, but experts warned that China must remain vigilant. on the duplicity in US China policy and possible flip-flops.

Sullivan told CNN that the goal of America’s China policy is to create a circumstance in which two great powers will have to operate in an international system in the near future. “And we want the conditions of that kind of coexistence in the international system to be beneficial to American interests and values,” he said, noting that under such circumstances, the traffic rules reflect an open, fair, free Indo. -Pacific region and open, fair and free international economic systems.

The senior US official admitted that the Chinese government is tackling many of those issues differently, and America’s goal is not containment and not another cold war. Sullivan also pointed out that “one of the mistakes of previous approaches to policy towards China was the view that through US policy we would bring about a fundamental transformation of the Chinese system”, which is not the aim of the Biden administration.

Those comments showed that the Biden administration tried to downplay its rhetoric about US-China relations compared to earlier this year, understanding that consistently emphasizing confrontation or rivalry does not benefit long-term bilateral relations. Lü Xiang, a researcher at the Chinese Academy of Social Sciences, told the Global Times Monday.

“In diplomacy, the current US administration is also trying to differentiate itself from the former Trump administration, and we welcome this change,” the Chinese expert said.

From high-level meetings between US and Chinese officials in Alaska in March to talks in Tianjin in July, to the last face-to-face interaction between senior diplomats of the two countries in Zurich, Switzerland in October, there have been positive signs of the candid talks and interactions between the two countries.

The US appeared to have adjusted its reckless and unrealistic strategy for dealing with China from the position of strength, especially after correcting an error on the two lists China submitted to the US in July over the issue of Huawei’s senior executive. Meng Wanzhou to solve, some experts said.

Objectively, the US is incapable of changing China’s political system, and Sullivan’s comments also showed that the US government has given up the fantasy of changing the Chinese system by keeping in touch with the country or suppressing it, Xin Qiang, deputy director of the Center for American Studies at Fudan University, told the Global Times on Monday.

“The problem isn’t that the US government doesn’t want to change China, but the US doesn’t have the ability to do that, and would only go down a bumpy road if they didn’t cooperate with China,” he said.

The two countries have multiple fronts to work together on, including some pressing issues such as climate change, prevention of COVID-19 epidemics and economic recovery.

“For example, on trade, the Biden administration planned to continue to pressure China with additional tariffs imposed by its predecessor. But those tariffs hurt America during the epidemic,” Xin said, noting that the words of Sullivan can be seen as a strategic promise that the US is willing to respect China’s core interests.

While the Biden administration’s goal is not to change the Chinese system, Sullivan pointed out that it must shape the international environment to be more favorable to the interests and values ​​of the US, its allies and partners.

“While Sullivan tried to downplay the rhetoric about China, he indicated that the goal of the Biden administration is to create an environment that is unfavorable for China,” Lü said.

Speaking of tensions in the Strait of Straits, Sullivan said the US government has no intention of changing the status quo, claiming the US government will continue to adhere to the One China Principle and the so-called Taiwan Relations Act.

Over the past few months, the US has been pushing its salami-cutting ploy to challenge China’s bottom line on the Taiwan issue. For example, the chairman of the US Joint Chiefs of Staff, General Mark Milley, recently claimed that the US has the ability to “defend Taiwan” and that US military aircraft have landed on the island, which were seen as serious provocation.

It is impossible for the US to give up strategic ambiguity over Taiwan, which would put itself in a deep dilemma, the expert warned.

The US has no better choice than to cling to strategic ambiguity, which experts say is currently the best option to defend its interests and avoid US-China conflict.

“We need to be careful of the duplicity in US China policy — in other words, say one thing and do another,” Lü said.

‘Pure manufacturing’, Beijing says on US charges against Chinese ‘spy’ who stole US aviation trade secrets
US and China push for cancer drug cooperation through new initiative
Comment