Tensions in the US-China Financial Market: The Road to Wealth or Ruin?

Financial ties between the US and China are blurring as conflicting national concerns about technology transfer, corporate transparency and data security threaten everything from Wall Street trading with Chinese corporate giants to US venture capital investments in China’s startups. But while Washington is navigating the way forward, it should stay focused on national security threats and avoid the temptation to push the two countries onto completely divergent paths that could increase the risk of financial market instability.

The pressure to separate the two countries’ financial markets has peaked over the past year, reflecting the centrifugal political forces straining bilateral trade in technology and other commodities. This does not necessarily herald the impending decoupling of the two superpowers’ financial markets, but with recent calls in Washington for new investment restrictions in China, the potential for disruption is growing.

This inevitably raises the question of how far each government is prepared to go. Washington needs to calibrate whether it is willing to risk this market instability and whether it wants to face a setback from powerful US financial interests that are happy to make money in China. And Beijing will have to decide whether it is really prepared for its companies to lose access to US stock markets, just as its own declining economy is facing pressure from a deeper downturn in the real estate market.

Relations between US and Chinese financial markets have never seemed closer than at the beginning of last year. China’s companies launched one wave of Wall Street listings (IPOs) in the first half of 2021, which helped Chinese stocks on US stock markets hit record heights In february. Foreign capital flooded into China’s markets – particularly government bonds – as the country’s economy recovered from its pandemic-induced downturn in 2020, and as US venture capitalists pumped money into Chinese startups close to the pre-pandemic pace.

But as 2021 progressed, the governments of both countries hit the brakes on Chinese IPOs in New York as China turned down on the tech giants who had become darlings on Wall Street and the United States started the clock on a process that could remove all Chinese companies from US markets by 2024 because China refuses to comply with the rules of disclosure.

Actions like these have already reduced the market value of Chinese companies listed on Wall Street by some six hundred billion dollars, and these losses are likely to increase as more Chinese companies move their IPOs to China’s stock markets. Already, twelve of the fifteen largest Chinese companies traded in the US has launched secondary listings in Hong Kong and many US institutional investors have changed theirs companies away from New York markets.

Nevertheless, US institutional investors continue to buy significant amounts of Chinese government bonds and equities across the Pacific and Chinese companies of U.S. government securities consistently tops a trillion dollars. None of the governments so far are targeting these cornerstone investments. But it has China’s economic problems nervous some U.S. investors over the past year, suggesting that investment in China may be more fragile than many analysts have assumed. See the fall of January across all Chinese asset classes, which sent China’s stock markets into their first bear market since 2019, leaving many U.S. investors with their portfolios exposed. The question is how investors will react if there are more shocks.

Now there are signs that there may be more market restrictions. Influential voices in Washington have begun to advocate – and try to do so legislateUnprecedented oversight of US venture capital activities in China. This start-up money has played an important role in the financing of Chinese industries right from semiconductors to biotechnologyand an industry discretion shows that about one-third of all Chinese venture capital trades by value in recent years include U.S. investors. Another industry report places total 2021 investment in China from Chinese and foreign venture capital firms to a record high $ 130.6 billion.

In July 2021 talkU.S. National Security Adviser Jake Sullivan said the Biden administration “is looking at the impact of outbound U.S. investment flows that could … improve our competitors’ technological capabilities in ways that harm our national security.”

US-China Economic and Security Review Commission (USCCs) annual reportreleased in November, recommended executive departmental and congressional actions to strengthen the rules focused on the flow of venture capital and other forms of investment to China’s military-industrial ecosystem.

Other types of investment in China that are facing scrutiny are securities based on market indices that include Chinese equities and bonds, which generate large amounts of passive institutional investment. The USCC has called for index providers and index-based derivatives to be subject to regulation by the US Securities and Exchange Commission (SEC), and expresses concern about harm to US economic and security interests.

Beijing is also moving to impose further restrictions on interactions between financial markets, in this case restrictions that will affect the legal basis for future Chinese IPOs. Regulators have proposed rules to curb overseas share issues based on variable-rate entities, shell companies that have operated in a gray area of ​​Chinese law and enabled billions of dollars of Wall Street listings. Last July decision by SEC Chairman Gary Gensler for pausing Chinese IPOs was based in part on concerns about the risks to investors associated with the legal strategy.

Beijing’s concerns about the presence of Chinese companies in – and dependence on – US capital markets are also grounded in national security concerns. Over the past year, the Chinese government has put in place data protection laws aimed at tight control over the use of enterprise data in China and its transfer abroad. At the same time, Chinese government agencies have announced regulations strengthening supervision of shares listed abroad.

China is in the final stages of mandating that government cyber security reviews be required for all companies with at least one million online users seeking to issue shares abroad. The clear implication is that Beijing will no longer be open to large e-commerce platforms with hundreds of millions of users on the list in the United States.

Beijing is also using its data security concerns to deepen its objections to Washington’s demands to inspect the books for already listed Chinese companies. This will probably only further complicate more than ten year long standoff over the company’s publication. Under the Holding Foreign Companies Accountable Act (HFCAA), passed unanimously by the U.S. Congress in 2020, Chinese companies can no longer avoid the controls to which all other companies listed in the United States are subject.

Beijing has consistently treated the publication of state investments and officials of the Chinese Communist Party in corporate governance required by the new US law as an impact on national security. Writing in the state-owned Economic Daily News January, Zuo Xiaodong, vice president of the Chinese Academy of Information Security, argued that SEC requirements for access to audit documents could lead to the loss of “all sensitive data” from listed companies abroad.

The SEC’s Public Company Accounting Oversight Board issued one last month determination that it has not been able to inspect or investigate sixty-three public audit firms in China and Hong Kong that carry out audits of Chinese listed companies, the first step under the HFCAA against an SEC decision that it cannot audit the 2021 accounts of Chinese listed companies. Three years in a row of such one fund will lead to delisting, a result displayed inevitable despite Chinese government claims progress in recent talks with the United States on the issue. (China is the only country that refuses to allow revision of US books of listed companies.)

In apparent anticipation of this result, the Hong Kong Stock Exchange has already loosened rules for companies to make secondary IPOs, a step that could open the door to at least 27 of the largest New York-listed Chinese companies, according to Goldman Sachs (many smaller companies still do not qualify). In addition, Beijing is expected to allow Chinese retail investors to buy shares in these secondary IPOs in Hong Kong – potentially promoting trading – once more companies have taken the step off Wall Street. Meanwhile, China has opened a new stock exchange in Beijing focusing on smaller technology companies, adding technology-oriented boards in Shanghai and Shenzhen.

For Chinese companies that once had a global stock market value of more than two trillion dollars on Wall Street, the question becomes whether the separation process will accelerate. With China’s banking system strained by problems in its real estate sector and declining domestic consumption in the face of pandemic-related closures, there may be less money to go around than Beijing’s bureaucrats imagine.

As with trade sanctions against China, the best way for US policy would be to maintain a unique focus on technologies with national security implications, including those financed by venture capital. Politicians should resist the impulse to target large bands in the financial markets given the uncertain impact on market stability. It will best serve U.S. national security interests and perhaps save this rift from becoming a complete breach.

Jeremy Mark is a senior fellow at the Atlantic Council’s GeoEconomics Center. He has previously worked for the International Monetary Fund and Asian Wall Street Journal. Follow him on Twitter @ JedMark888. 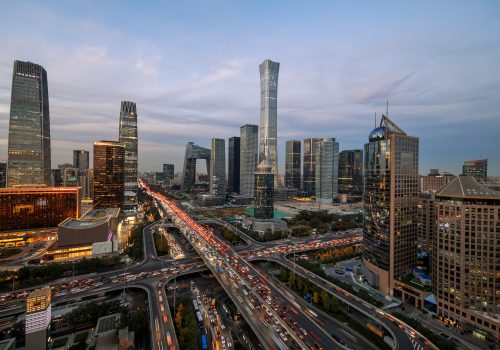 Over the past ten months, teams from the Atlantic Council and the Rhodium Group have taken a dive into China’s economy to address a fundamental question: Is China becoming more or less like other open market economies?