US trade with China will increase by 28.7% in 2021, but rising deficits show that tariffs are “a failure”

Trade between China and the United States rose 28.7 percent to $ 755.6 billion in 2021 – maintaining strong growth momentum and contributing 12 percent to China’s record $ 6 trillion foreign trade per year despite tariffs and fierce policies tensions between the world’s two largest economies.

The figure, which comes just one day before the second anniversary of the signing of the Phase 1 trade agreement between China and the United States, shows a strong complementarity between the world’s two largest economies, while also demonstrating China’s goal of meeting its commitments. under the agreement over the past two years, observers said.

According to data from the Chinese Customs, released on Friday, China’s exports to the United States increased by 27.5 percent in 2021, while imports grew by 32.7 percent and reached $ 179.53 billion.

“The booming trade figures are within industry expectations, proving the complementarity between China and the US trade structure, and more importantly, that Washington’s repression and ideological war over China is a divorce from objective laws,” said He Weiwen, a former senior trade official. and an executive board member of the China Society for World Trade Organization Studies, the Global Times reported Friday.

Friday’s figures point to a sustained growth momentum from 2020, when trade between the world’s two best economies was back on a growth track, after a dip in 2019, when violent trade tensions splashed bilateral imports and exports.

China’s trade surplus with the United States was $ 39 billion in December and $ 396.5 billion for 2021, further expanding from a surplus of $ 357.5 billion in the first 11 months, according to Global Times estimates.

The surplus even grew from before the trade war in 2018, when China’s trade surplus with the United States was $ 323.3 billion.

The enlargement was in sharp contrast to the United States’ ambitions to reduce the gap – one of the main motivations for former US President Donald Trump to start the trade war against China. Most of the extra tariffs have remained in place during the Biden administration.

The growing deficit proves that U.S. tariffs on Chinese products “are a failure,” and manufactured in China products are irreplaceable, He Weiwen said.

“It’s time for the United States to scrap all tariffs,” he said.

The removal of additional tariffs has been the desire of the US business community. “We wanted tariffs to be mutually reduced or completely eliminated … US jobs were lost and higher costs for imported goods due to tariffs cost the average household over $ 400 a year,” the US-China Business Council (USCBC) said ) in an interview with the Global Times via email. 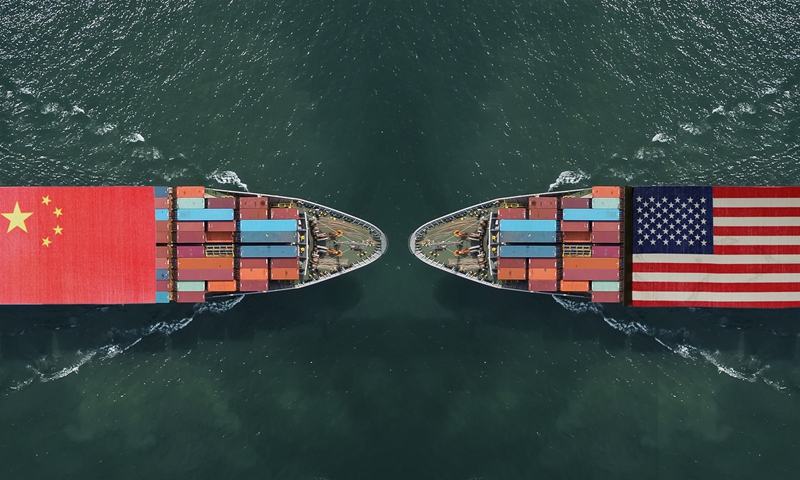 Ahead of the two-year anniversary, there are also growing discussions about the results of the Phase 1 agreement and the next step for the world’s two largest economies.

Some in the US claim that China has failed to achieve its target of buying US products and services, while many in China cited the US’s escalating repression of Chinese companies and lingering tariffs and other restrictions, as well as uncontrollable external factors such as pandemic.

The American repression of China’s technology sector has expanded from 5G to artificial intelligence and biotechnology in a desperate attempt to maintain its shaky technology dominance.

The amount of soybeans that China bought and shipped from the United States was estimated at about 27 million tons, with a turnover of more than $ 14 billion, said Zhang Xiaoping, country director for China at the US Soybean Export Council (USSEC). to Global Times.

That amount accounted for more than a quarter of China’s total soybean imports over the past year, which was $ 53.54 billion.

That [phase-one] agreement … helps U.S. soybean exports to China quickly resume and continues to benefit industries and people in both countries, Zhang said.

The U.S. soybean industry appreciates the partnership it has established with Chinese industry and is confident of welcoming the 40th anniversary of serving China and the landmark 2022, Zhang told the Global Times.

Chinese Trade Ministry spokesman Shu Jueting said Thursday that since the entry into force of the Phase 1 agreement, China has been working to overcome several unfavorable factors, including the COVID-19 pandemic, a global economic recession and supply chain disruptions, to push for it. joint implementation of the agreement.

“There is no doubt that the agreement benefits both China and the United States as well as the world … The trading teams from the two sides maintain normal communication and if there is any further information, we will release it immediately,” Shu said at a regular press conference. in Beijing.

Trade can still be a buffer and the cornerstone of China-US relations, observers said, noting that China will first and foremost look after the interests of its businesses and people.

It is possible that China’s imports from the United States may “increase on a large scale” by 2022, as there are many agreements “under negotiation,” Gao Lingyun, an expert at the Chinese Academy of Social Sciences in Beijing, told the Global Times on Friday.

Gao stressed that procurement must be based on fair prices and China’s own requirements.

Expansion of circle of friends

Across the globe, China’s trade topped $ 6 trillion in 2021for the first time in history, when the Chinese economy, a global forerunner to limit COVID-19, continued a solid recovery over the past year.

Aside from a growing trade with the United States, the country also had major gains in trade with almost all of its major trading partners throughout 2021.

Its trade with economies involved in the Belt and Road Initiative (BRI) grew by 23.6 percent, 2.2 percentage points higher than the overall growth rate, customs statistics showed.

In 2021, China’s yuan trade to the 14 member states of the Regional Comprehensive Economic Partnership (RCEP) also increased by 18.1 percent year-on-year, accounting for 30.9 percent of the country’s total foreign trade.

“China’s trade figures for 2021 prove that its trade strategy is balanced, rather than a preference for the United States, and overlook others under the Phase 1 agreement, as some have speculated,” He Weiwen said.

A more diverse range of trading partners and an integrated industry chain in Asia-Pacific will give China more influence in its future trade negotiations with the United States, observers said.

China’s trading landscape is facing increasing uncertainty, instability and imbalance amid recurring waves of the pandemic. This means that the country’s relevant advantage in taking the lead in the economic recovery may be weakened, customs spokesman Li Kuiwen said at the press conference on Friday, noting that the country’s resilience and strong economic fundamentals will not change in the long run, and thus sharply. supports a push to stabilize trade.