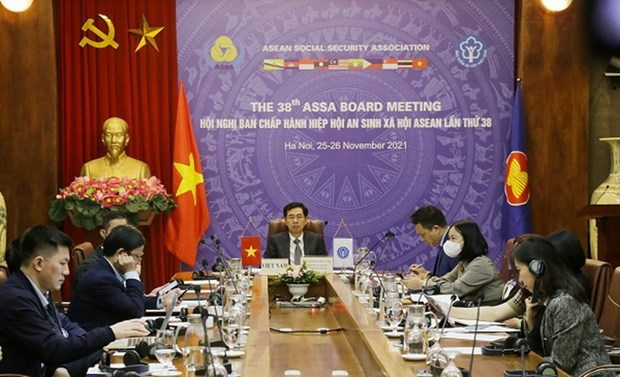 After the opening ceremony, the delegates attended the first session themed “COVID-19 and economic uncertainties: impact and policy responses” and the second themed “Digital solutions for social protection”.

As scheduled on November 26, the ASSA Recognition Award Ceremony will be held. The VSS is also being honored in the information technology category with the launch of the social security app VssID, which makes it easier for citizens to transact social and health insurance policies quickly and easily. By November 22, more than 24.5 million Vietnamese had installed the app and 22.8 million of them logged in.

During the closing session, the meeting will adopt its agenda, hand over the ASSA symbol and documents to the new chairman and secretary-general, and propose the theme for the next meeting.

The ASSA was established in 1998 following the signing of a Memorandum of Understanding in Bangkok, Thailand on February 13 of that year, involving heads of social security institutions from the Philippines, Indonesia, Malaysia, Singapore and Thailand. Representatives from Laos and Vietnam also attended the signing ceremony as observers. Later that year, the VSS became a member of the ASSA./.

Why women and men should save for their retirement differently