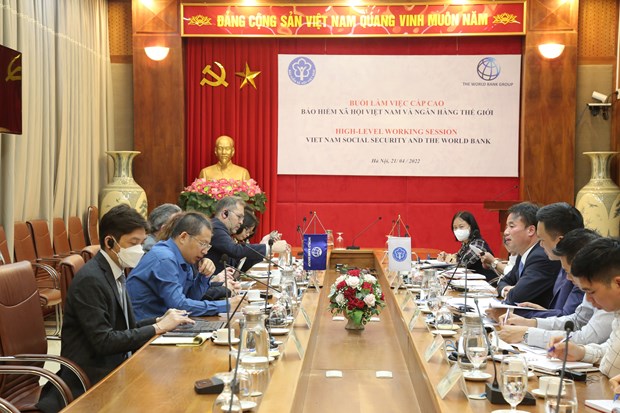 Hanoi (VNA) – Director-General of Vietnam Social Security (VSS) Nguyen The Manh called on the World Bank (WB) to help the Agency further improve the quality and efficiency of its social and health insurance services during its meeting with WB Country Director-General for Vietnam Carolyn Turk in Hanoi on April 21st.

The two sides discussed plans to expand collaboration on building and implementing social and health insurance.

Highlighting of WB‘s effective support for VSS in three areas, namely the modernization of the social security sector, the promotion of universal health insurance coverage and the strengthening of the management of investment funds, he also noted that the WB actively assists VSS’s involvement in the revision of social security and health insurance laws.

The VSS Director General hoped for more practical and useful consultations from the partner to develop social and health insurance; and for more assistance in building capacity for its staff in information technology, public administrative reforms, extending insurance coverage to workers in informal sectors and others.

Turk, for his part, talked a lot about the development of social security and health insurance in Vietnam and said that WB will continue to support VSS in realizing its goals in the near future.

She noted that the WB has been involved in the revision of the Social Insurance Act, focusing on how to attract more informal workers to join social insurance schemes, increase the efficiency of investment funds and better control of health services covered by health. insurance./.